Mimmo Alfarone was born on the 9th of June 1958 at Gioia del Colle, in the province of Bari, a small town with roots both in prehistoric times and in the reign of Frederick II.  It is situated in a privileged position in the centre of Puglia, halfway between the Adriatic and Ionian seas.  Here he passed his youth.  In the spring of 1969 Alfarone’s teacher at elementary school wanted to keep the student’s album of drawings for himself, and notes in the student’s profile: ‘he demonstrates a distinct talent for drawing and manual activities’.  Alfarone attaches no importance to these words, which perhaps he did not even read, but continues to draw everything around him, experimenting with various materials and expressive techniques.  His is a natural and expressive talent, an artistic inclination that emerged also during middle school, such that he was advised to apply for art college, but this was not to be taken into consideration and he abandoned his studies.  His parents did not oppose their son’s decision, probably because they saw his future in the family business, but their contribution was nonetheless significant in as much as they were always willing to supply the materials which allowed him to cultivate his passion for art.  Their influence was also decisive; from his father he inherited his artistic sensibility, while from his mother he gained an extraordinarily strong intuitive spirit.  He felt himself ever more involved in every form of art, gradually increasing his creative stimulus and refining his artistic sense.  In this way he began to observe, with different eyes, a series of paintings kept at home which had until that moment appeared as merely decorative objects.

Many of the works attracted him, particularly the landscapes, but those which most involved him were the portraits of his grandparents and of his great-grandmother.  They were two oils from 1913 and a chalk pastel from 1910, created by his paternal great-uncle, Sabino Torelli, and his teacher Francesco Romano, painters in Puglia at the end of the 19th and beginning of the 20th centuries.  The latter was one of the most important Italian pastel artists, showing alongside G. Balla, A. Dall’Oca Bianca, G. A. Sartorio, E. Alciati, G. Trussardi-Volpi, and M. Beduschi in the first Probitas exhibition in 1914, in the Palazzo delle Esposizioni in Rome. He painted constantly, completing approximately 40 pieces, and at 16, with the encouragement and help of two friends, he held his first solo show in his city in May 1974.  It was a great critical and general success, selling all the works shown.  His second exhibition the following year, exhibiting works inspired by the surrounding landscape, would show him the future. The desire for praise and esteem beyond public opinion led him to attend art college (the Liceo Artistico Statale di Bari), where he gained his diploma in just two years.  Here he also discovered sculpture and thus decided to attend the Academy of Fine Arts (Accademia di Belle Arti), where he was able to deepen his study of the human figure, to which he felt himself particularly attracted.

In the first year his followed the course of Decorative Painting and Ornamental Modelling taught by Raffaele Spizzico and Mimmo Conenna, but he continued with Painting, first with Antohy, with whom he studied figurative painting, then with De Palma, with whom he experimented with abstraction.  De Palma awarded him full marks and an added distinction, the ‘lode’. With Mario Colonna he discovered engraving, and followed the courses Special Techniques, Screen Printing, Theory of Perception, and Psychology of Form and Colour with A. Plotko.  From Pietro Marino he acquired his first ideas about contemporary art, and learned the first name linked to the new informal and conceptual influences: from da Afro, Vedova and Christo, to Kounellis, Manzoni and De Dominicis. He graduated in 1981. The drawings which constituted his thesis on anatomy, The Face and its Expressions, were displayed at the stand reserved for the Accademia at the International Fair of Contemporary Art at Bari (Fiera Internazionale di Arte Contemporanea Expo Arte di Bari).

He assimilated ideas on the history of art in an independent way, consulting various monographs by past masters.  Subjects of study were the anatomical studies of Leonardo da Vinci, the pastel portraits of Umberto Bocconi completed in the 1910s, the faded faces of Renzo Vespignani and the illustrations of Walter Molino. The artist’s academic experience became decisive for his expressive development, which kept its figurative stamp but was by now inspired by an intimate and remove himself from the provincial realm and enter into a more open and structured culture. Between 1984 and 1986 he passed three public exams and qualified to teach Art Studies (Materie Artistiche) in the secondary school.  In 1986 he was given the post of teacher of Art Education in the Middle Schools of the Province of Venice. In 1989 he won two teaching posts in Painting, in the art college (Liceo) of Novara and at the Institute of Art in Udine. He accepted the latter, where he taught for a decade, and where he encountered a contemporary culture steeped in history, from Tiepolo to Balsadella. He came into contact with the artistic world and this offered him various professional opportunities, as well as being invited to participate in various personal and collective shows both in Italy and abroad. With his students he visited the biggest cultural centres, from Rome and Florence to Prague, Paris and Barcelona.

It was however in Venice, where he has got the post of teacher of painting at the Art High School, that he received further precious opportunities, unique in the artistic field, meeting and coming to know men such as Jean Clair, Philip Rylands, Pierre Restany and Raffaele De Grada, Fabrizio Plessi, Sandro Chia and Gianfranco Ferroni. A dear friend facilitated a meeting with Franco Belgiorno Nettis, who encouraged him in his work, defined certain concepts within international contemporary art, giving them a certain slant, and put him in contact with his friend in the USA, Robert Storr. To these people he dedicated a series of portraits which begin the cycle entitled Identity in History. 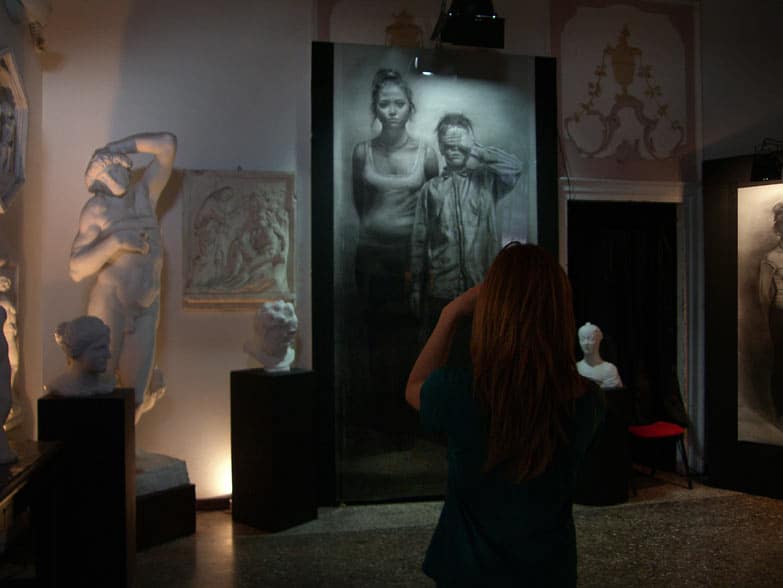 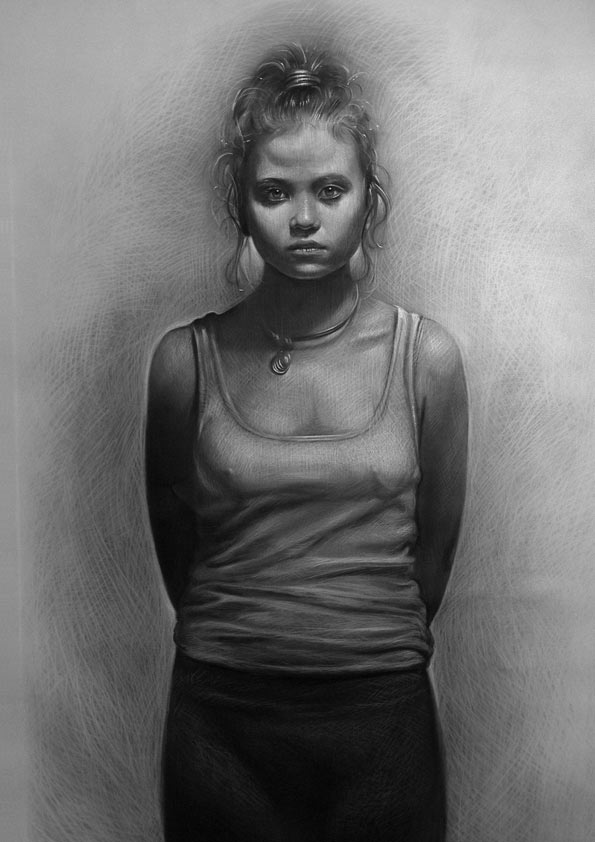 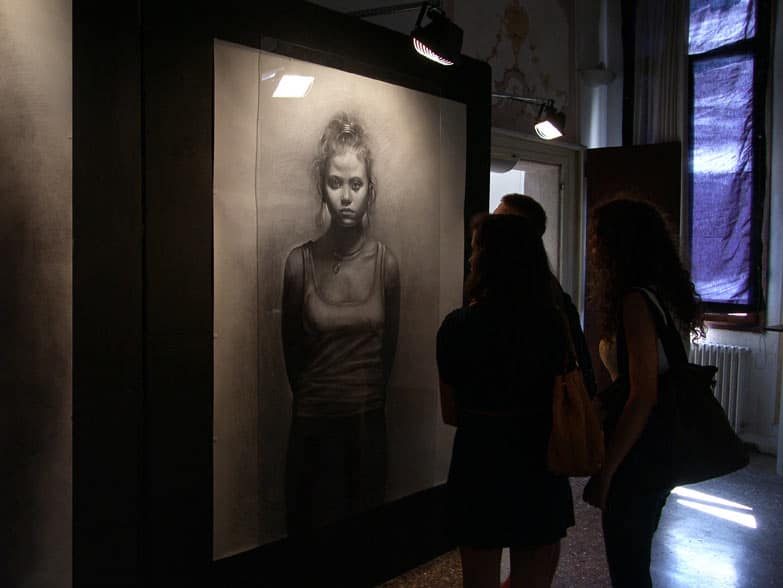 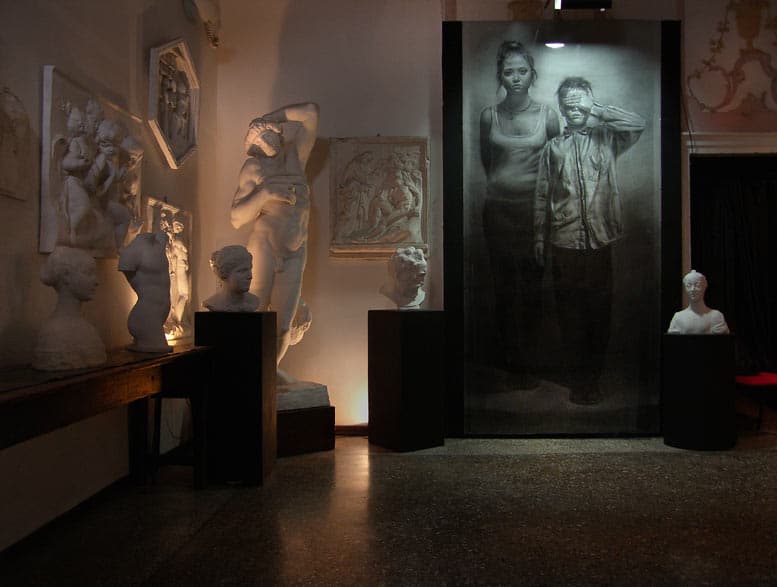 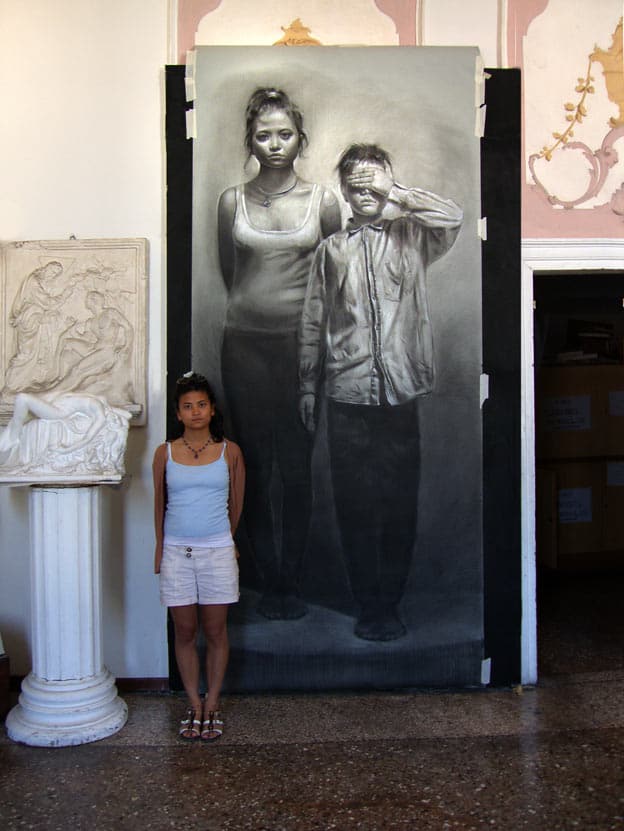 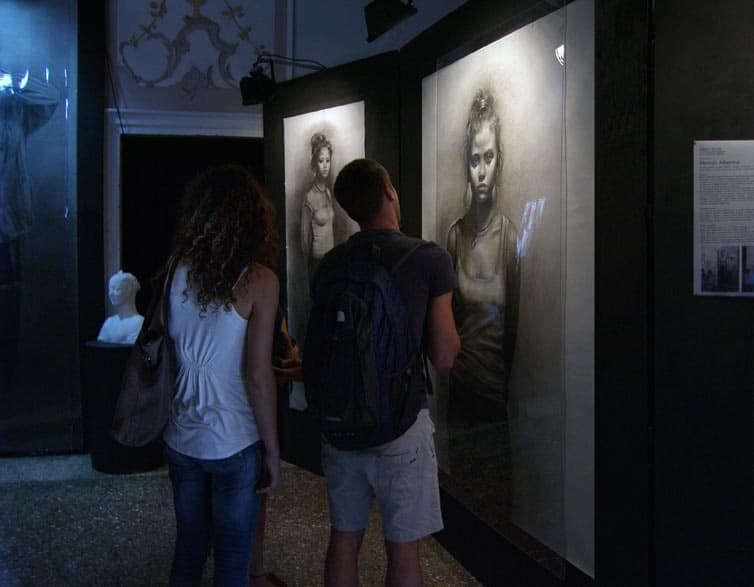